Posted by K. Fuller on February 26, 2015 in culture, french, politics |One Comment 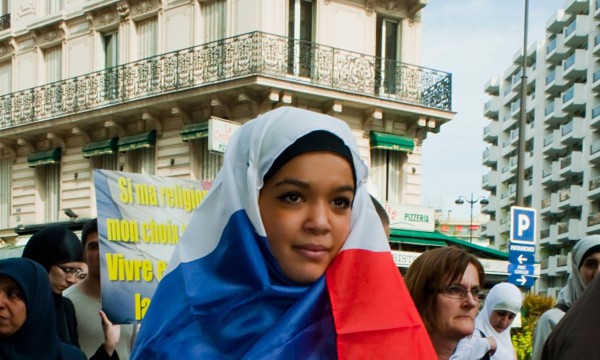 “France, tu seras heureuse lorsque tu es guérie enfin des individus.”
(France, you will be happy once you are finally cured of individuals.)

National identity is more than a feeling. It must be based on shared core values, a common history, and a sense that who you are is connected to where you live. Apart from occasional hiccups, this sense of belonging must be unshakeable.

This feeling – and everything underneath – has been shaken in France since Charlie Hebdo.

In a recent New York Times article, M’hammed Henniche, the head of the Union of Muslim Associations of Seine-Saint-Denis, said, “France is the country of the Declaration of the Rights of Man. But that’s all it is, a declaration.” From his vantage point, national belonging is dead.

And herein is the crux: “being French” lies in the eye of the beholder. The vast majority of French Muslims live as all French do, and many of them are not overly religious. Yet they are seen as the exception rather than the rule – extremists win the public eye.

As France increasingly welcomes Islam into its fold, French identity faces greater scrutiny. What does it mean, and who has access? The above article raises the notion of France’s secular democracy as teetering on totalitarian. Under the republican motto “Liberty, Equality, Fraternity,” all individuals are equal regardless of race, religion, or gender. Yet what happens when French secular identity becomes unequal – open to some but not all? When does state-sponsored secularism (or laïcité) become as sacred and inviolable as religion itself? President François Hollande recently declared the concept of a secular state “nonnegotiable.” France even pronounced December 9 a new Day of Laïcité.

Such measures, intended to unite, easily divide. Indeed, while French identity is open to all, it is also inherently closed. Racial and religious difference, or particularité, is absorbed into the national whole. By tradition, France celebrates all difference as equal. Yet, if difference cannot be recognized – there is no “race” or “ethnicity” in France’s national census – how can it be celebrated?

Statistics seemingly reflect this contradiction. According to Pew Research Center statistics, 72% of the French have a positive view of Muslims, higher than in any other European country. Incidentally, France has one of the largest Muslim populations among European Union member countries, second only to Germany. As of 2010, there were 4.7 million Muslims in France (7.5% of the country’s population). However, as cited in a recent Newsweek article, Muslims make up less than 10% of France’s 66 million population, yet half of the prison population. Difference may not allegedly be seen, but it is certainly felt – and not just in statistics.

What does it mean to be French? One should ostensibly speak the same language (French), dress according to French norms (no religious signs), identify with a shared history (if not by blood then national pride), and perceive “Frenchness” in national sites of memory (monuments, cemeteries, etc.). Above all, citizens must see themselves reflected in a binding national narrative.

The Charlie Hebdo tragedy called this all into question. If everyone is French, why would anyone commit such a horrific act? Why would the banlieues (French suburbs traditionally encompassing poor immigrant communities) and HLMs (low-income housing) still be alive and well? Why would some young French Muslims choose not to observe the national minute of silence for lives lost at Charlie Hebdo? One 14-year old, identified as Louins by the New York Times, said, “They don’t respect us, and then during a minute of silence we’re supposed to honor them? How can someone render homage to someone who doesn’t respect us? We can’t.” While such alienation cannot – and should not – acquit the perpetrators of this crime, it does highlight deep rifts in French society.

In a New Yorker piece entitled “Five Lessons About France After Charlie Hebdo,” the second lesson listed is “France is united—and divided.” While the spirit of unity is alive (approximately 3.7 million people attended the January 11 Republican march to commemorate the Charlie Hebdo deaths), discord is not far behind. At roughly 200 schools out of 64,000, some French Muslim students refused to observe the minute of silence, as noted above. Furthermore, the National Observatory of Islamophobia recorded 116 anti-Muslim acts in the three days after the Charlie Hebdo attacks, a 110% surge over the month of January in the previous year.

Why such conflict? In a French Morning interview, TV5 Monde Senior Editor Slimane Zeghidour puts class before race, “In France there is no racism based on skin color… Even if there is very little or no racial prejudice, there is a very strong prejudice of class that is translated to a stigmatization of people living on the outskirts of big cities and who in large part are immigrants or the children of immigrants from Maghreb or Africa. But white people who live in these places are not better off.” While undoubtedly true, class is not the sole factor. Class prejudice can generate (or be generated by) prejudice that uses skin color as its gauge. Identifying, and understanding, such prejudice is the next step.

In 2001, as an undergraduate student at Wesleyan University in Paris, I wrote a thesis on France’s integration model and its cultural, historical, sociological, political, and legal roots. In France, integration, fundamentally entwined with laïcité, means assimilation – as opposed to American multiculturalism. For this paper, I interviewed several North African second-generation immigrant adolescents, from Paris and the Parisian banlieues. Their revelations were, at the time, surprising. Primarily middle-class, they were born in France yet felt neither fully French nor fully North African. With distinct names and faces, some had to fight to obtain equal access to schooling, employment, and housing opportunities. With obligatory photos pasted on their résumés, others felt doomed from the start. They had friends who changed their last names to escape such latent discrimination. Their frustration was clear: difference was used to discriminate without acknowledging difference in the first place. Such unspoken inequality breeds contempt, disenfranchisement, loneliness, and anger – the opposite of national identity, the opposite of what it means to be French.

Then and now, I must put my American mindset away. Our multiculturalist model of integration simply would not work in France. Relativism here is crucial because, while both Western democracies historically and ideologically linked, France and the United States are not the same. We must recognize that difference.

As France must do now with her citizens.

The strictly secular model of French identity cannot continue functioning ad nauseam. The whole is no longer greater than the sum of its parts; some could be modified or repositioned to accommodate changing realities. This model, and ensuing intolerance, is becoming just that – a model. While viscerally anchored in the French national consciousness, it does not fully fit anymore. To counter Hollande, aggressive secularism should be “negotiable.” Like fitting a circle on top of a square, how much can one fruitlessly push down until its shape must be rethought?

The Charlie Hebdo tragedy is the most macabre of wake up calls – to start a dialogue, not about security measures, but about what it means to be French. This is thankfully already under way. “Being French” has evolved, and integration must too. For France’s sake as a united nation full of difference.